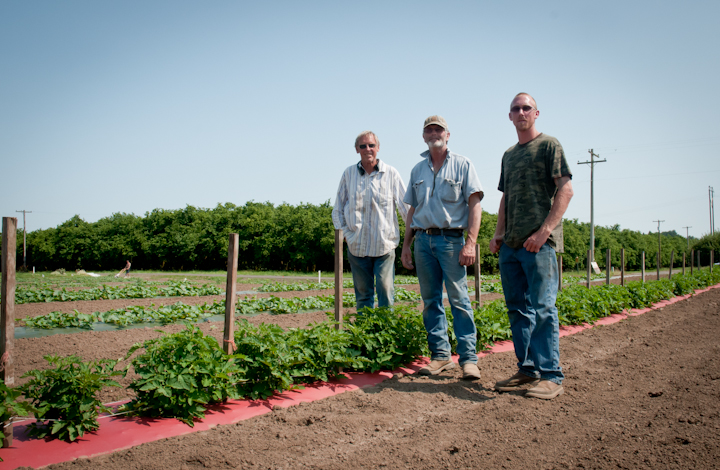 The big orange letters mean a sure thing

On a drive down Highway 20 between Corvallis and Albany, Oregon you’ve no doubt seen it. The bright red siding, the sparkling aluminum roof, the perky orange letters spelling out “The Melon Shack.”

Three generations of the Winn family have lived and farmed on this corner of land here in the Willamette Valley. Whether growing corn, wheat, or pasture for cattle, Tim Winn and his son Terrill Winn say they’ve seen it farmed in every way.

For the past ten years it’s been home to some of the best watermelon and cantaloupe in the Willamette Valley, and although there isn’t so much as a fist size melon ball in the soil before Independence Day, in just a few weeks these melon farmers will be in full production. Terrill, the youngest of three living Winn farmers working the land today tells us,

“We hope to start the harvest mid-July and be open for business on July 25th.”

In addition to being in the Melon Shack in July, this field’s fruit has been selling at local farmers markets since 1990. The Winns’ longtime business partner, Mike Hessel, known to many as “The Melon Man” also sells the fruit under the label Red Hat Melons at local grocery chains like New Seasons Market, Roth’s and Market of Choice.

“We’ve been great partners for over 10 years now, and I’m looking forward to many years to come,” says Hessel.

Just this past year the Winns and Hessel have expanded the nine acres behind The Melon Shack to a whopping twenty three. Even with this large increase in acres, though, they do not plan on adding any more employees.

They do, however, plan on buying a wheel hoe from Carts and Tools.

“The wheel hoe is a perfect match for this operation. It can get in there and gently cut, and is forgiving on the plastic.”

Michael McGowen of Carts and Tools, who passes by the melon patch daily, saw the need of tool he had been tinkering with, so he brought over an early prototype wheel hoe for them to try. And then, having gained valuable field trial feedback, Michael incorporated some improvements and he brought another one by.

Everyone felt the first model, with its dual side-by-side wheels was just what they needed for weeding in-between the long rows of plastic covering, which shade the melons and reduce weeds. But the Winns found that the second model, a solo wheel design, flexible cultivator blades, and ease of use was easier to maneuver and being lighter – an improved design.

“We can’t afford to get too close to the plastic and that’s where the narrow wheel and smaller flex blade is better,”

says Terrill, making a pass with the hoe through his three-foot rows.

The Winns also say that one of their employees, Tyler, who has the used the wheel hoe more than anyone, is much more efficient and that he loves the ease of operation.
“With our older hoes Tyler would be tired and worn out in just a few hours,” says Terrill. But with this one, even in the 100-degree heat, he has the energy to keep going.”

With the help of Carts and Tools solo wheel hoe (and Tyler) the entire twenty three acres can be weed free in about two days.

“We have a lot more to weed this year,” Tim says about the increase in acreage. “We will be increasing our production by 70 percent, so it will continue to be a benefit with the addition of these new tools.”