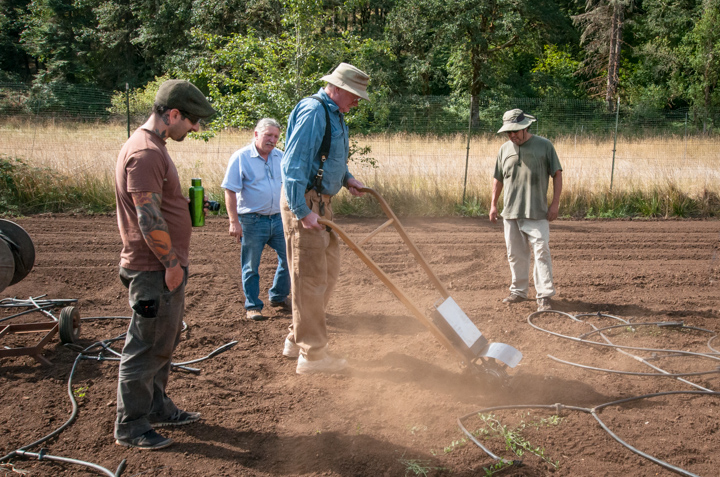 Pleasantly tucked away in the Camas Swale Valley near Eugene, Oregon and flanked by evergreens, Sweetwater Farm is the epitome of a small organic farming.

You name it, they got it— tomatoes, peppers, eggplants, cucumbers, zucchini, corn, beans, onions, garlic, and enough berries to last year-round.

So much produce in fact that it allows Good Food Easy, Sweetwater Farm’s CSA program, to provide nearly 150 customers with fresh, organically grown fruits and vegetables 49 weeks each year, with breaks only between Christmas and New Years.

“We harvest greens and root vegetables year-round, and lay in supplies of storage staples such as onions, potatoes, garlic, and winter squash,”

…says John Karlick, an all-organic farmer who has been minding these fields since 1979.

Karlick, a bit of a farm legend in these parts, is a toolmaker himself and can still be found in the fields by day and tinkering late into the night. After formally retiring in 2012 he handed the reins to Erica Trappe, the farm manager who has been working at Sweetwater since 1994.

Trappe and a few loyal workers including Donna Stearns, Robert Smith, and Tom Karakalos provide produce weekly to families in Eugene, Springfield, Creswell, and Cottage Grove and even boast home delivery for a small fee.

Good Food Easy also buys produce from other local organic growers to supplement their harvest, so there is always a good variety of fruit and vegetables in the shares.

While their motto may be Good Food Easy, it’s certainly not referring to the constant hand weeding that’s going on in the fields each day.

“We have problems with Morning Glory out here,” says Karlick, who is a bit of a weeding expert himself and has even written a primer on weeding practices.

It was no surprise that they were excited to see how well the Tillie and Solus, the new wheel hoe, would ease their weeding on the farm’s twenty acres.

Spotting a potato field that needed a little tidying, Michael went to work right away on the weeds, rustling up the dirt for future planting. Michael is quick to state…

After a quick demo, the group was eager to try it out, and headed over to the carrot fields. Robert had churned over a few rows in a quick minute without breaking a sweat.

Erica watched Tillie take on weeds all morning and nodded with approval after giving it a try herself,

“It puts those weeds right out of their misery. When can we get one?”