Last week we introduced you to Paul and Nonie of Harcombe Farm in part 1 of our new “Local and Not So Local Farms” feature. This week we continue with part 2 and some thoughts about bindweed. 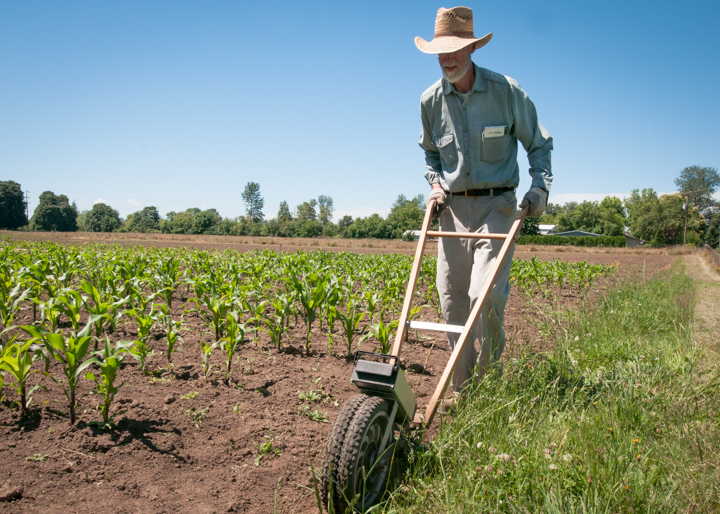 Yes, we’re talking weeds and farming here. Paul does battle with bindweed constantly. “It has a deep root system, each time you chop off the head it continues to get back up again,” he explains.

Weeding once every seven to ten days had taken its toll, but Harcombe realized it wasn’t so much the time, but the exhausting effort it required. That is, until he met Michael McGowen of Carts and Tools, and heard about the new motorized wheel hoe that McGowen had been working on. He was happy to be the guinea pig.

“I’ve had a wheel hoe for years so now that I discovered it can be motorized it’s a whole new ballgame. I can do a much better job with the bindweed with this new product.”

Weeding Harcombe’s fields requires three passes down the long rows of his 12-acre farm. This work has led to back and knee problems from hunching his tall and slender frame over a manual hoe.

“It doesn’t cut down on as much time as you think,” says Harcombe. “The real savings is not so much the time, but in the energy. It really makes a difference in how I feel at the end.”

Paul is a long-time Carts and Tools field tester

Harcombe was one of the first testers of Carts and Tools Wheel Hoe, and has been an invaluable resource for product updates. After a trial run last year, he suggested that the handle structure wasn’t sufficient and the balance needed significant improvement. The throttle too, which was on top now sits lower on the wheel hoe’s inner handle, where a handler’s thumb or index finger would rest.

He also says speed is key, so while a traditional manual hoe can often be lumbering, the updated wheel hoe by Carts and Tools gives the user the ability to control speed and has a lighter feel than a traditional hoe.

While Harcombe Farm has increased production each year since in 2009 they have no plans to add additional staff or require pesticides thanks to the motorized wheel hoe. The Harcombes are keeping their dream alive by growing and sharing great food while leaving the soil better than they found it.